Once purely a technology innovator and alternative to the ‘usual suspects’, SonicWall had a new management team, solid private equity backing, an expansive product vision and the backing of one of the most bought-in distribution channels in its space.

Those looking to carve a niche in the hectic and over-funded cyber security vendor space face severe competition at every turn. Every major technology company across the globe, even those without a strong IT security story, is aching for press inches. However, differentiating from other vendors and commentators is always key to ride the wave successfully.

Since January 2018, Positive has turned the tide of coverage, providing SonicWall with a proactive and hard working press bureau. Pushing SonicWall successfully in a noisy market requires a non-traditional and incredibly agile approach.

On a Positive note, there were no shortage of stories for SonicWall to plug into. The strategy was to release news by telling a story and tying it into trends to create results.

Positive’s rapid response to relevant news stories, such as tensions between the US, UK and Russia, various data breaches, including the Facebook Cambridge Analytica scandal, and ransomware attacks, created opportunities for SonicWall to comment. We additionally approached the channel and tech press with independent research and SonicWall announcements.

The results are clear; consistently positive coverage in the tech, national and channel media in the UK. Journalists now understand SonicWall is its own entity, see the company as an important mouthpiece for the cyber industry and engage on a regular basis.

Positive targeted key channel press including Microscope, which covered SonicWall a number of times, and Channelnomics. We engaged with the tech press, securing coverage in publications such as The Register, Verdict, Computer Weekly and SC Magazine. In addition, we used SonicWall’s expertise in the cyber security space to achieve coverage in The London Evening Standard, BBC news, including BBC Business Live, Business Insider and The Independent. 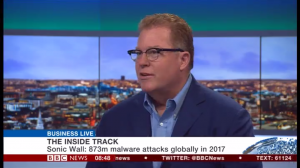